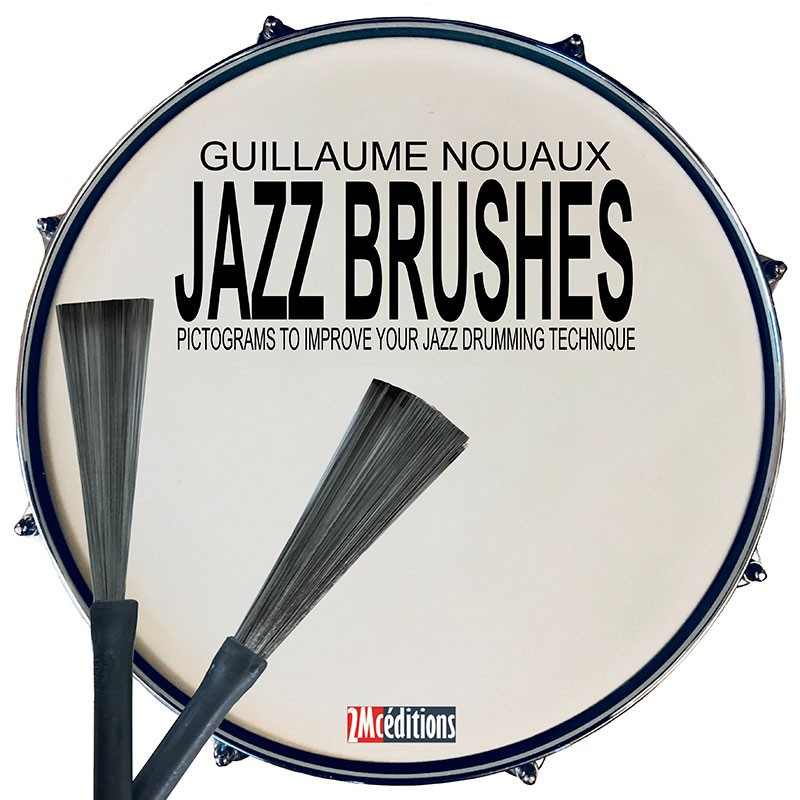 Easy and fun for everyone, JAZZZ BRUSHES provides more than thirty pictograms to help you develop the art of jazz accompaniment skills. Most of the situations commonly encountered in the jazz repertoire are covered; ballad, swing medium, fast swing, grooves shuffle, waltz, Latin... I recommend you practice directly on this book by following the path drawn for each hand. Start by working on each hand separately before trying to play them together. The particularity of this method is that you will absolutely not need a drum kit, or even a snare drum to practice... but only this book and a pair of brushes! Once you have memorized the gestures to be performed, you can then transpose these patterns onto your snare drum. I would like to point out that all the exercises presented here will sound great while accompanying that I commonly use in a real game situation behind the different artists with whom I play. Naturally, you are free to mix them together. Look for different combinations yourself, be creative to create your own patterns.

Have a good swing and don't forget to have fun!


Guillaume Nouaux
Born in Arcachon (France) on July 30, 1976, Guillaume Nouaux is an essential drummer on the classical jazz and swing scene in Europe. He regularly plays in major festivals and jazz clubs with many artists. It has performed in most European countries, Brazil, Africa, the Caribbean, the United States... As a leader, he was awarded the "Special Jury Prize" by the Hot Club de France for his album Drumology with the Tuxedo Big Band. He has participated in the recording of more than 80 albums, including 8 under his name. During his career, Guillaume Nouaux has performed and recorded with many internationally renowned aretists such as : Ken Peplowski, Bob Wilber, Evan Christopher, Scott Hamilton, Harry Allen, Steve Lacy, Donald Harrison Jr, Leroy Jones, Wendell Brunious, Bob Barnard, Duke Heitger, Leon "Kid Chocolate" Brown, Warren Vaché, Wycliffe Gordon, Dan Barrett, Dado Moroni, Butch Thompson, Jason Marsalis, Chuck Berry, Didier Lockwood, Cecile McLorin Salvant, Lillian Boutté and many others.

Be the first to write your review!

5 other products in the same category: