Musical Engraving is the art of formatting music in a rational and harmonious way to facilitate the work of reading and performing the musician.

The precursors engraved the copper by means of punches. Nowadays thanks to software like Finale, if the work is largely facilitated, the goal is identical.

The engraver has to understand music in two ways. The first, macroscopic, for the organization on the page of the musical discourse with the respect of the sentences and especially the organization of the "turns", and the second, microscopic, for the respect of the rules of notation like the spacing of the notes, Inclination or placement of ligatures. But there are many others. Just read the Ted Ross bible "The Art of Music Engraving & Processing" to convince yourself.

Nowadays, with the appearance of contemporary music, the engraver also has a role of creation in the conceptualization of the composer's thought by the invention of new graphics and musical signs.

Some sheet for exemple

For a better display, the extracts are in PDF format. Requires Acrobat reader 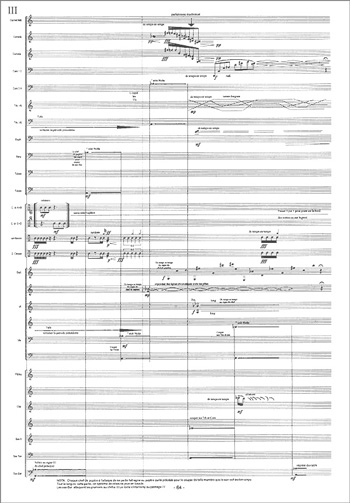 Jean Paul GILLES, creator of 2Mc editions has been passionate since 1994 for this art and has realized all the engravings of his catalog. He has also engraved many pieces of music in all genres, from piano-chant to opera, jazz big band and contemporary symphonic orchestral music.

Creation of conductor and material for the creations of the Regional Orchestra Bayonne Côte-Basque (compositions by Pierre Çabalette, including an opera "Ilargi Xendera", Nicolas Bacri, Etienne Rollin, François Rossé) Al Bab "and the orchestra of the ENM of the Landes" Les Machines à Sons "by Fabien Tehéricsen. Musical engraving for "the Musical Consortium". Supervision of the layout of Caroni Music. Opera for children "Oraure et Bergerou" by Serge Lecussant, Collection of String Quartets for the Garat project in partnership with Musikene (Superior Center of Music of San Sebastian) and CM ediciones musicales de Bilbao. Conductor and material for the musical "Terrains vagues" by Jacques Colson. Trainer to the music engraving software Final for the General Council of the Pyrénnéees Atlantiques in the direction of the music teachers.

As every engraving work is a unique work, it is difficult to propose a generic tariff. A quotation will be submitted after consultation and sending a copy of your manuscript.